Weinbach pianos provide stunning performance and incredible sound which is achieved through a unique international collaboration in design and manufacturing. Combining the strongest components from the Czech Republic, China, Germany and the U.S., Weinbach is taking the piano industry to the next level.

For many years, Weinbach pianos, which are distributed in the U.S. by Geneva International Corporation, have been overshadowed by the stronger and more widely recognized Petrof and Nordiska brands that are also distributed by the Chicago, Illinois based distributor. However, in 2004, Geneva International’s president, Earl Matzkin, along with John Elliott, the company’s Product Development Manager, developed a strategy that would breathe new life into the Weinbach brand.

The solution was found in combining the efforts of the Petrof and Nordiska factories to capitalize on the strengths of both manufacturers. The Czech-based Petrof Piano Company, who has a long tradition of producing exceptional piano actions and other key elements for high-quality sound production, would provide those components to Nordiska where they would be joined with the soundboard, plate and other case parts produced in the Nordiska piano factory located in northern China.

The specifications on the Weinbach pianos serve to emphasize its international status as they feature Mapes bass strings, Abel hammers and Roslau treble wire in addition to the components produced by the Petrof and Nordiska factories. The multi-laminate, hard Maple rims; solid spruce soundboards; wet sand-cast iron plates and solid, hand-notched, hard maple bridges coupled with a dynamic and responsive Petrof manufactured actions have served their purpose in providing Weinbach with a new identity and bringing Geneva International’s dreams to reality.

“Weinbach is truly an international piano,” commented Elliott, “we have case parts from China, actions from the Czech Republic, hammers from Germany and bass strings from the U.S., all working together to produce a remarkable instrument.” 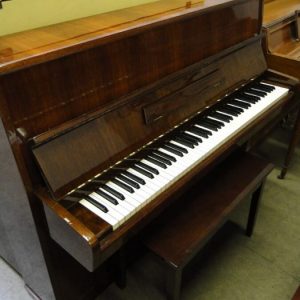 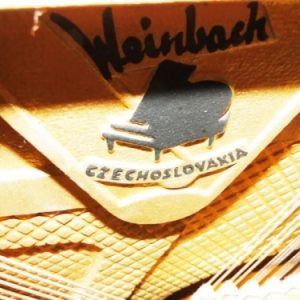 Want to inquire about our new and used Weinbach Pianos? Then contact Universal Piano Services at (416) 230-5560 or fill out the form below. We are open 7 days a week by appointment only.