Petrof is a Czech piano maker. The company was founded in 1864 in Hradec Kralove by Antonin Petrof (d.1915) who had studied piano making in Vienna.

In 1857, The founder of Petrof Pianos, Antonin Petrof leaned how to built grand pianos in Vienna. By 1865, Antonin Petrof transforms his father’s joinery workshop into a piano maker’s workshop with the workshop later moving to a new property in the direction of Brno. The company then started with keyboard production and the construction of action and later begin exporting instruments abroad, later opening a subsidiary in Temesvar in Hungary. By 1908, the company became a limited company. Not only the founder Antonin Petrof but also his sons Jan, Antonin and from 1914 the youngest Vladimir (2nd generation) work for the company.

Later, Petrof together with the significant American manufacturer STEINWAY had opened a subsidiary in London at Wigmore Street. By 1932, the company management enlarges the company administration with the 3rd Petrof generation: Dimitrij, Eduard and Eugena.

In 1948, the Petrof company begins nationalization – the national company Tovarny na piana a varhany (Piano and organ factories) with a registered office at Hradec Kralove is established; the PETROF brand is further used. After the nationalization, the created a development department for upright pianos and grand pianos

Jumping forward almost 50 years, the begin new modern research centre with own big-capacity free-field measuring chamber, biggest of its kind in the Czech republic in 1994. Finally, in 2005 – Zuzana Ceralova Petrofova was appointed president of European Federation of Music Instrument Manufacturers. 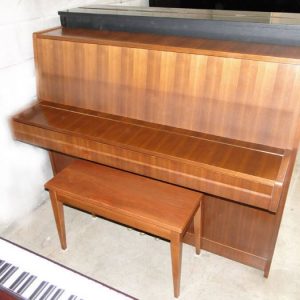 Want to inquire about our new and used Petrof Pianos? Then contact Universal Piano Services at (416) 230-5560 or fill out the form below. We are open 7 days a week by appointment only.